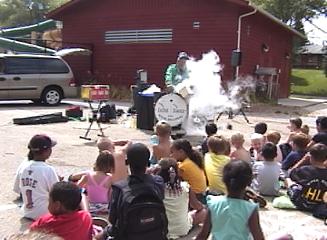 This summer was very busy with lots of library, festivals and club shows across Illinois, Wisconsin, Indiana, and Michigan.

This weekend will be 3 large back to school public science shows in Cicero, IL

My friend Bill Bosworth from Science Alliance is retiring due to health concerns.  Over the last few weeks I have met with Bill and agreed to perform for most of his outstanding booked shows.   We have spoken in detail of both of our shows.    We compaired notes on most topics and I look forward to the shows and workshops.    Bill is a great man with whom I have always admired over the past 20 years. 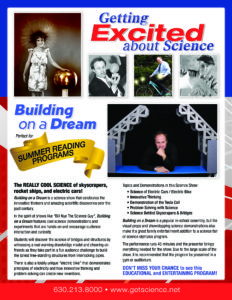 This summer Getting Excited About Science was performed at camps, libraries, park districts, and head lined many festivals.   Some groups had hands on workshops, many shows were outside and we had lots of fun across Illinois, Wisconsin and Indiana.

Cicero, IL had the show to kick off Back to School week.   I will be perofming a show on the night of the solar eclispe and plan to set up my telescope with solar filter.

This week Getting Excited About Science was a Keynote a conference with over 1,000 students and 400 parents.   Here is an article from the local paper. 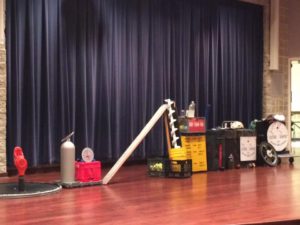 Palatine, Illinois school saw how simple machines are used in everyday life along with some large scale examples.  The show featured a tug of war where 1 girl beat 4 boys, a 6′ Chicago Style Draw bridge, Giant Screw, shot put pendulum, wheels and a rocket car.   This is the 6th time I have performed for this school.

This is a video form Prairie State College STEM day program in September which shows several segments of my show.

This October there have been the school assembly science shows, but new this year is a series of shows for the Old Town School of Folk Music in Chicago for school field trips.  This is a beautiful stage and historic building.   Shows are October 21 and 27.   October 21 is already sold out at the time of this post.   Here is a link    https://www.oldtownschool.org/concerts/2015/10-21-2015-FT-Getting%20Excited%20About%20Science-1030am/

Toward the end of October there are many park district and school Spooky Science shows including shows in Palos Heights, Minooka, Riverside, West Chicago and North Riverside.

Earlier in October Getting Excited About Science was featured at Prairie State College STEM day.  It was great fun and great enthusiasm with the students.  https://www.facebook.com/GetScience/posts/1060898057288371 Here is a link to the STEM program

This summer I have performed for camps and scout groups.   Several camps had Getting Excited About Science for each session.   There were also large public shows at festivals, fairs and libraries.   Lost of traveling through Illinois, Wisconsin and Michigan.   This summer also marked a mini tour of Chicago Public Libraries performing an Astronomy and Space show.

This September will have hands on science workshops and STEAM programs at several Illinois Libraries.   In addition, I will be at two School Assembly Showcases.    Book your school assembly early to ensure the best dates.